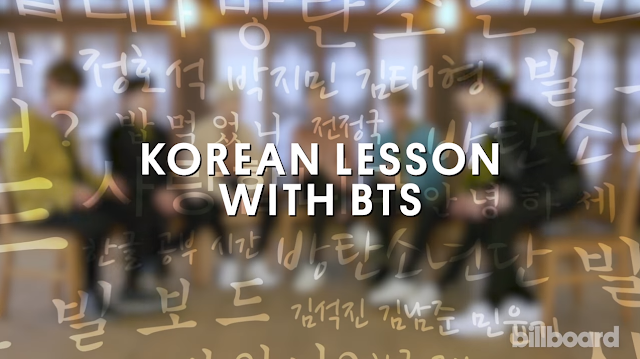 Korean Lesson with your Idol (1) – BTS Here are some Korean phrases that BTS members would like to teach ARMY! This was the clip from the Billboard cover shoot in last year, 2018. You probably have heard about these phrases if you’ve ever been to KPOP concert or even watch concert clips! If you wish to go to the BTS concert in the future and would like to understand what they are saying, this blog post will help you so much! Let’s start! ©Billboard YouTube captured image “ 모두 뛰어 ” [Mo-du Twi-uh] Everybody jump ‘ 모두 [mo-du]’ means everybody  and ‘ 뛰다 [twi-da]’ which is the lemma of ‘ 뛰어 [twi-uh]’ means to yell out or to shout at. ‘ 뛰다 ’ also means ‘to run.’ So '모두 뛰어'  can be translated in both ‘Everybody jump’ and ‘Everybody run.’   ©Billboard YouTube captured  image “ 소리 질러 ” [So-ri Jil-luh] Make some noise ARMY! Make some noise~!! 소리 질러 is probably the most used phrase in concert. ‘ 소리 [so-ri]’ means sounds or noi
Post a Comment
Read more

General Information About Korea Hello Friends ! In this post, I would like to talk about general information about Korea. Some of you may or may not heard about the country, Korea. Our blog will cover many interesting contents about Korea, and here we start with basic information! Where is Korea? The Republic of Korea is located in the eastern part of Asia. Neighboring with China and Japan, Korea peninsula is located between the East Sea in the east and the Yellow Sea in the west. Language of Korea Hangeul was introduced in 1443 by King Sejong. King Sejong is the 4th king of Joseon Dynasty. He created Hunminjeongeum, meaning proper sounds to instruct the people, to help people to read and write easily with the new alphabet. Hangeul is composed of 14 consonants and 10 vowels. Five main consonants ( ㄱ , ㄴ , ㅅ , ㅁ , ㅇ ) imitate the shape of lips and tongue, and three main vowel ( • , ㅡ , ㅣ ) symbolize the sky, the earth and mankind respectively. October 9 is
Post a Comment
Read more

Live Korea
Want to know everything about Korea? Korea travel info, foods, culture, language, KPOP and more! We post the most current and fun contents about Korea♥